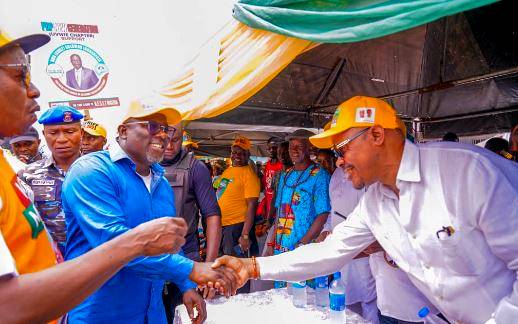 In a countdown to the 2023 general elections, Delta State PDP Governorship Candidate and Speaker of the State House of Assembly, Chief Sheriff Oborevwori, has accused the All Progressives Congress, APC led federal government of destroying Nigeria with its poor policies.

Oborevwori who stated at Uvwie during the PDP ward-to-ward campaign to the local government area insisted that APC must go and urged Nigerians to vote the party out of power.

He appealed to Nigerians to vote massively for the PDP, adding that only PDP could reset Nigeria if voted into power.

“The promotion of poverty by the APC-led federal government is the cause of insecurity. The unemployment rate has also risen almost all industries are dead. Even Federal roads that were constantly maintained by FERMA during the PDP-led federal government between 1999 and 2015 have stopped. FERMA is no longer working. The APC Muslim/Muslim ticket is not doable, such a ticket cannot fly in a diverse society like Nigeria.

He said Alhaji Atiku Abubakar, would bring his wealth of experience as former Vice President and in business to bear in the governance of the country if elected President together with his running mate.

Oborevwori also appealed to the people to vote for him, his deputy, Chief Ighoyota Amori for Senate, Delta Central District, and all other candidates of the PDP, Barrister Evelyn Omavowan Oboro for House of Representatives, Okpe/Sapele/Uvwie Federal Constituency and Chief Solomon Okporua Ighrakpata for Delta State House of Assembly, Uvwie Constituency

He added that his M.O.R.E. agenda would bring meaningful development, opportunities for all, realistic reforms, and enhanced peace and security.

He said: “Governor Ifeanyi Okowa has done a lot in the area of infrastructure, health, human capital development, peace and security, and prudent utilization of state resources, among others. I will listen more, achieve more and do more to consolidate on the gains of Governor Ifeanyi Okowa’s achievements.”

He urged the Uvwie people to vote to say he worked tirelessly through the DC-23 to ensure that the governorship seat came to Delta Central District; vote because she is eloquent, vibrant, and experienced; to enable him to use his wealth of experience to develop Uvwie.

Chief Ighoyota Amori, Barrister Evelyn Omavowan Oboro, and Chief Solomon Okporua Ighrakpata, who also spoke at the campaign promised to give adequate representation to the people and appealed to the people to vote for the PDP from top to bottom.

Amori commended the people of Uvwie for the massive turnout, adding that it showed their readiness to vote for all PDP candidates in 2023.

He noted that Uvwie played a vital role in the formation of PDP in the state and appealed to the people to vote for him and all other
PDP candidates for more development.

Amori said the Okpe/Sapele/Uvwie and Ughelli North/Ughelli South/Udu Federal Constituencies had both represented Urhobo at different times at the Senate, “so I urge all of you to vote for me for the Senate, come 2023.”

Barrister Evelyn Omavowan Oboro on her part said Nigeria was a better country when PDP was in power, saying; “prices of food and other products were moderate; fuel price was less than N100; a dollar was less than N200; the economy was booming and rated one of the best in Africa.

“But today, APC has destroyed Nigeria in less than eight years at the Federal level with failed economic policies. Fuel is now about N250 per liter; a bag of local rice is now N55,000; a dollar is now over N800 in the black market.”